Today, Miss Lake joined me (and 4,000 of my closest friends - - not bad for Kansas) in the Women's March at the State Capitol in Topeka.

I had the perfect shirt to wear.  I don't wear it very often as there is a definite danger of being run over by a truck when I have it on (again, I'm in Kansas).  I figured today I would be safe. 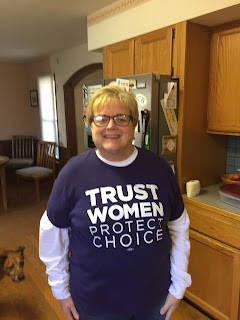 Becca and Sarah, newlyweds and new friends of Miss Lake! 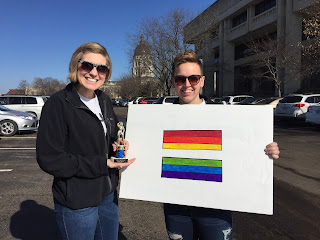 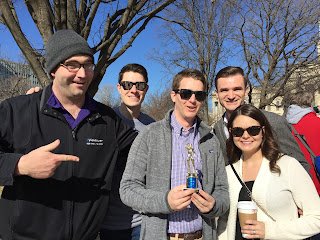 I still haven't quite mastered holding Miss Lake AND taking a picture.  Just think, but next January, I'll be really good at this! 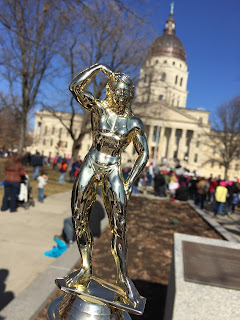 I used my elevator speech with this guy and he not only agreed to have his picture taken with Miss Lake, he suggested he turn around so the capitol would be in the background. 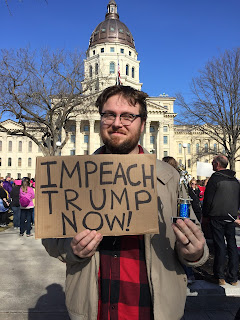 Are you wondering if the governor was around?  Yeah, he wasn't.
If you watched the inauguration of he who will not be named and saw a goofy looking guy a couple of rows back in an ugly orange tie, THAT was our governor. 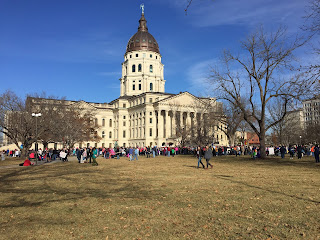 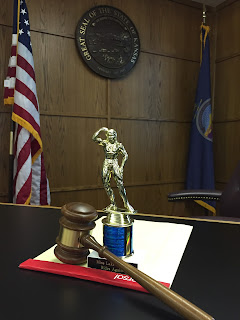 Miss Lake dropped by Riley County District Court and snuck up on the bench for a quick photo.
The bailiff was out of the courtroom and didn't know that mischief was afoot.

I've been working on my 15 second elevator speech to explain why I am where I probably shouldn't be with a statue of a female body builder and a camera.
I start with "I got an award for being funny" and go from there.

What with my mad ninja skills, I haven't had to try it out yet.

Until Next Year, Miss Lake is a Chiefs Fan 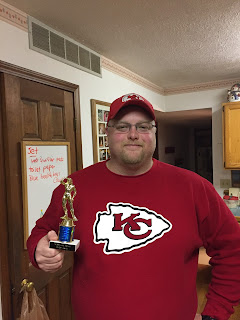 Who could pass up an opportunity for Miss Lake to have her picture taken with the biggest Chief's fan in 6 states?  Not me, that's for sure.

My son, Luke, who is used to his mother's half baked idea of fun, says he's on board with Miss Lake's year of adventures and has promised to do what he can to stop traffic, sneak into locked buildings, approach strangers, drive the get away car, whatever it takes to get That Picture.

However, he did inquire about who would pay his bond.
I told him I probably would, but it was dependent on whether or not we got the photo.

After what seems like a very long break (only because I was in a car with my husband driving halfway across the country), I was back in the office today.

Ahhh, the first day back in the office.  What's a better than that?  Forgetting you just had a root canal and drinking a frozen margarita?  Thinking you are texting your best friend about your dumbass sister and you are actually texting your mom?  Dressing up as a KU fan on Halloween, forgetting it's K State's homecoming, running into the Vice President for Student Affairs and trying to pretend there is not a Jayhawk tattoo on your cheek?  (And yes, it was every bit as awful as it sounds.  I told him that it was either dress as a Jayhawk fan or an attorney and I chose the one that wouldn't get me beat up on the playground.  I'm not sure he bought it, but I do still have a job.)

This is Holton Hall, the home of Student Legal Services.  I took this picture early in the Fall when the sun used to shine. 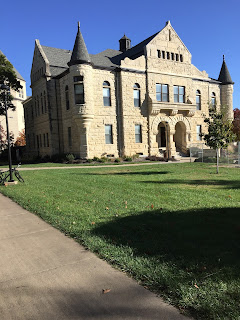 This picture I took today.  The sun is on holiday (but not in Santa Barbara....) and the ice is coming.  (Game of Thrones, anyone?) 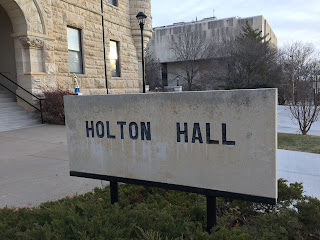 There, you see her?  Sitting on the top left side of the sign?  Lean in, squint a little.  No?  Lean back then and go get your glasses.  She's there, I promise.

While I'm here, I'd like to call your attention to the bushes which surround this sign and which I had to crawl into in order to get this damn picture.  I dodge traffic in Winslow, I climb in bushes in Manhattan; what won't I do for a picture of Miss Lake?

I shared my award with my colleagues in the Office of Student Life and they were appropriately impressed.  Maybe "impressed" is overstating their reaction a bit.  Now that I think about it, I might have mistaken "what the hell is she talking about" with "impressed".

It's easy to do.  Happens to me all the time in court. Three thousand four hundred and seven miles.
Miss Lake was there for half of them.

Every mile driven without incident.
Until....

60 miles from home, I hit 2 deer.  Yep.  TWO deer.
Miss Lake was in the back seat longing for the warmth of Texas and the relative calmness of Ray's  custody.

The deer were small and the damage was minor.  Both animals got up and ran away, but I am sure they were looking for a deer chiropractor.  After being cleared by the Kansas Highway Patrol, I drove the rest of the way home.  The only evidence of the incident being 2 small dents in my hood and a bit of deer hair (hair? fur? fuzz?) stuck in my grill.

The silver lining?  I had a sort of rattling noise under my car that has disappeared.

Good morning, Miss Lake!  Time to get in the car and head east. 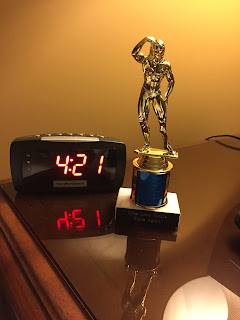 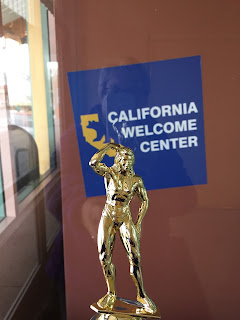 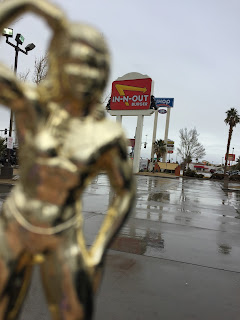 Some of these photos are a bit "Where's Waldo"-like.  I promise Miss Lake is in all of them. 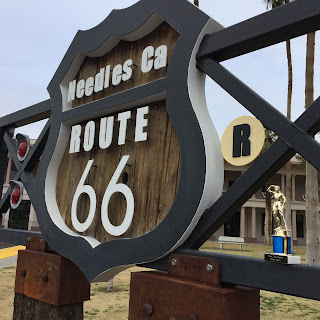 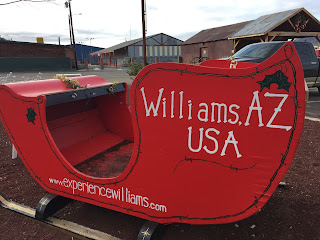 Who could pass by the exit for Winslow, Arizona without stopping?  Not me, that's who.  The Eagles and "Takin' It Easy" are from the soundtrack of my early college years. 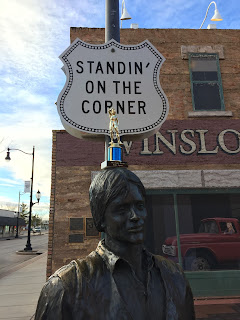 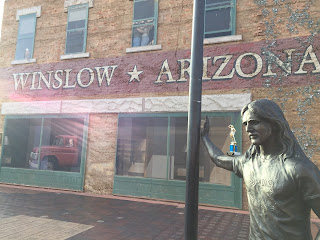 You now understand that I will risk life and limb (and Miss Lake herself) to get a photo.  This is in an intersection in Winslow, Arizona, and took a couple of attempts.  I was trying not to get killed by drivers who, for some reason, were not watching for someone running in and out of the intersection carrying a trophy. 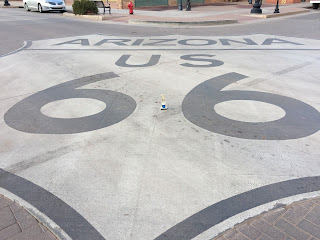 My long suffering husband was hoping I wouldn't end up as a hood ornament on a passing Chevy.  He doesn't know the PIN for the debit card.

That's marriage security.
Posted by Sarah at 7:10 PM No comments:

Before leaving Santa Barbara, Miss Lake checked out the view from Room 333.  Little does she know that in less than 24 hours she is headed to a place that is as far away from any body of water as anyone can be. 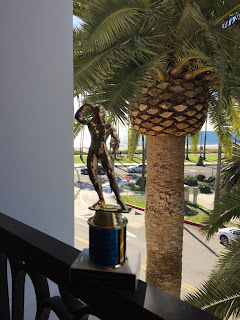 I figured I'd let her enjoy the warm sun and the beautiful view for as long as she could.  Shit is about to get real. 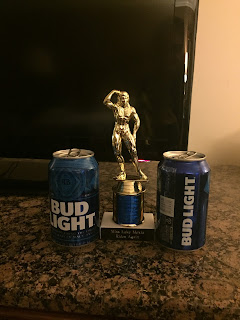 Oh my goodness.  Is this how the entire year is going to be with Miss Lake?
We can only hope.

Later in the day, however, she did attend one of the CLE sessions and by doing attempted to dispel the rumors that she drinks too much 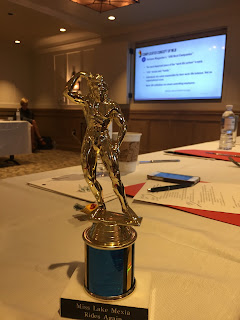 I'm not sure she was successful.
Posted by Sarah at 6:23 PM No comments:

And So It Begins

So many awards, so many deserving attorneys.
Office of the Year.
Special Project of Excellence.
Outstanding people in general.

And then there's the Miss Lake Mexia Rides Again award.  Sounds impressive, doesn't it?
Yeah.  It's not.

USLSA Patriarch, Ray Schiflett, III, found a trophy of a female body builder flexing her muscles in a bargain bin at the local Trophies R Us store in central Texas.  The plate on the front read "Miss Lake Mexia Rides Again".  Even though he had absolutely no idea what that meant, he couldn't resist paying the $3 asking price and breathing life back into Miss Lake Mexia, whoever she might have been.

It seems only right at this point to get everyone on the same page about Mexia, a city 40 miles east of Waco.  It's pronounced "Mex-ee-uh".

No, I'm kidding.  While that's how we would pronounce it in Kansas (Canz-Ass), let's go with "Muh-hay-uh", shall we?

Back to the award, Ray paced the floor, lost sleep, chose a ditch to die in, and decided to give this award (and I use the term loosely) to someone with a good sense of humor who would keep it for a year and then, at next year's conference, pass the torch to another funny person.

That's it.  Nothing else required.  Only laughter.

I've can do that.

After all the "real" awards were handed out, photos were taken and everyone (me) insisted that the winner of the Miss Lake Mexia Rides Again award be included. 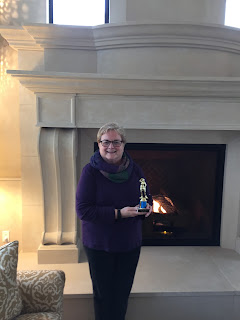 Here's my plan for Miss Lake Mexia (thanks to Jon Carlos Senor):  she and I will travel the globe and I will take her picture at various places and with random people.  I'll post here and keep you updated on our adventures.  An added benefit is that she fits nicely in my purse so I'll rarely be without her.  This is going to be quite a year!

Because it's on my mind, why do you suppose Miss Lake Mexia is riding again?  Where did she ride the first time?  Why is she a body builder?  Did she get those muscles reeling in fish from the lake?  Why was the trophy never picked up?  Did Ray pay too much for it?  Perhaps these questions and many others will be answered over the next 12 months.  Perhaps not.

But, the quest will be a hoot.
Posted by Sarah at 6:18 PM No comments: